The Ethiopian National Defense Force (ENDF) is the military of Ethiopia. Civil direction of the military is carried out through the Ministry of Defense, which oversees the ground forces, air force, as well as the Defense Industry Sector.

The size of the ENDF has fluctuated significantly since the end of the Ethiopia-Eritrea war in 2000. In 2002 the Ethiopian Defense Forces had a strength of approximately 400,000 troops. This was roughly the same number maintained during the Derg regime that fell to the rebel forces in 1991. However, that number was later reduced, and in January 2007, during the War in Somalia, Ethiopian forces were said to comprise about 300,000 troops. In 2012, the IISS estimated that the ground forces had 135,000 personnel and the air force 3,000. 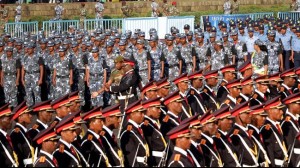 As of 2012, the ENDF consists of two separate branches: the Ground Forces and the Ethiopian Air Force. Ethiopia has several defence industrial organisations that produce and overhaul different weapons systems. Most of these were built under the Derg regime which planned a large military industrial complex. The ENDF relies on voluntary military service of people above 18 years of age. Although there is no compulsory military service, armed forces may conduct call-ups when necessary and compliance is compulsory.

The modern ENDF has a wide mix of equipment. Many of its major weapons systems stem from the Communist era and are of Soviet and Eastern bloc design. The United States was Ethiopia’s major arms supplier from the end of World War II until 1977, when Ethiopia began receiving massive arms shipments from the Soviet Union. These shipments, including armored patrol boats, transport and jet fighter aircraft, helicopters, tanks, trucks, missiles, artillery, and small arms have incurred an unserviced Ethiopian debt to the former Soviet Union estimated at more than $3.5 billion.

Ethiopia made significant purchases of arms from Russia in late 1999 and early 2000 before the May 2000 United Nations arms embargo went into effect. It is likely that much of that equipment suffered battle damage in the war with Eritrea, suggesting that raw numbers alone may overstate the capacity of the defense forces.

The International Institute for Strategic Studies estimated in the Military Balance 2009 that the army comprised 4 Military Regional Commands; (Northern (HQ Mekele.), Western, Central, and Eastern) each acting as corps HQ.There was also a Support Command and a strategic reserve of 4 divisions and 6 specialist brigades centred on Addis Ababa.

Each of the four corps comprised a headquarters and an estimated one mechanised division and between 4-6 infantry divisions.

Ethiopia has served in various United Nations and African Union peacekeeping missions. These have included Côte d’Ivoire, on the Burundi border,and in Rwanda.

Two major Ethiopian missions are in Liberia and Darfur. The United Nations Mission in Liberia (UNMIL) was established by United Nations Security Council Resolution 1509, of 19 September 2003, to support the implementation of the ceasefire agreement and the peace process, protect United Nations staff, facilities and civilians, support humanitarian and human rights activities; as well as assist in national security reform, including national police training and formation of a new, restructured military. In November 2007, nearly 1,800 Ethiopian troops serving with the United Nations Mission in Liberia (UNMIL) were presented with UN Peacekeeping medals for their “invaluable contribution to the peace process.”Up to three Ethiopian battalions used to constitute Sector 4 of the UN Mission, covering the southern part of the country.

Many thousands of Ethiopian peacekeepers are involved in the joint African Union/United Nations Hybrid operation in Darfur, western Sudan. The Security Council authorized a UNAMID force of about 26,000 uniformed personnel.